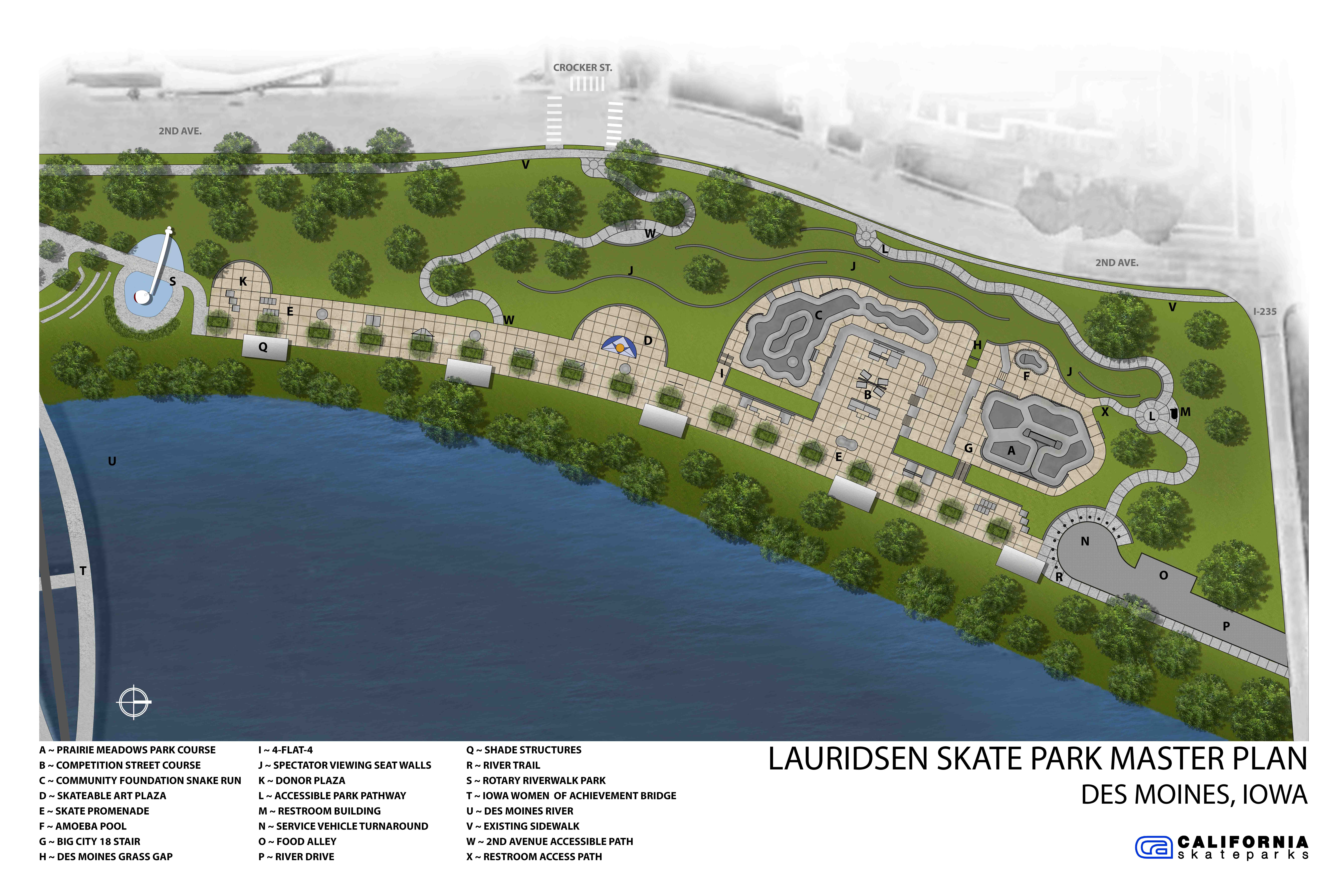 Central Iowa is hoping to connect 150 miles of river and streams. To do so, it’ll have to make three low head dams in downtown Des Moines safe for travel.

A dream of local area youth — who, 14 years later, are now young adults — came to fruition Monday with the official start of construction on a world-class skate park in downtown Des Moines.

At 65,000-square-feet of skate-able surface, the Lauridsen Skatepark will be the largest in the Midwest and the second largest in the United States. It’s expected to open next summer — just one year before skateboarding makes its Olympic debut at the Tokyo 2020 Games.

The skate park spans 5 acres of riverfront property just northeast of Wells Fargo Arena near 2nd Avenue and School Street. It will serve as a regional amenity with the potential to attract 40,000 skaters per year and the capability to host local and national skating events.

The skate park was first proposed by a group of central Iowa youth as part of the A Mid-Iowa Organizing Strategy in 2004, but fundraising for the $3.5 million project has been slow. A recent $1 million donation by Nix and Virginia Lauridsen and a $400,000 grant from Prairie Meadows helped push supporters to the $3.3 million mark. Donations are still being accepted to fund the gap.

More: Plan for ‘best skate park in the country’ not dead in Des Moines

Designed by world-renowned skate park developers California Skateparks, the park will have a lower level pedestrian walk, a plaza, a 300-foot downhill snake run and several skate bowls and pools. Details on the handrails were inspired by the arches and cables on downtown Des Moines’ bridges.

The park will be open to all ages and skill levels. Supporters say it will be used by skateboarders from the Des Moines metro and across the Midwest, as well as onlookers who will visit the park just to observe.

“As a dad, I cannot be more excited to get my kids out here, away from their devices,” Anderson said.

Skateboarding’s popularity has ebbed and flowed since the 1970s. But supporters expect to see a spike in popularity as skateboarders participate in the Olympics for the first time at the 2020 summer games, said Josh Friedberg, CEO of USA Skateboarding, the national governing body for the sport.

The fastest growing age group of new skateboarders is 45- to 54-years-old, he said.

Friedberg, who attended Monday’s groundbreaking ceremony, said he’s impressed by the community’s commitment to finding a way “to address the focused interest and growing participation of skateboarders” in the Des Moines metro.

He said he’s equally impressed by the tenacity of the local young skateboarders who spearheaded the project.

“Skateboarding is special in so many ways,” he said. “The perseverance that skateboarding teaches you is one of the most important lessons in life.”

Des Moines’ skate park will serve as the “linchpin” to a plan to bring water activities such as surfing and kayaking to the Des Moines River, Connolly said. Fundraising for the $117 million Greater Des Moines Water Trails and Greenways Master Plan is ongoing.

This message is only visible to admins.